Sassafras (Sassafras albidum) is one of the most easily identified trees in Connecticut. The aromatic leaves are usually 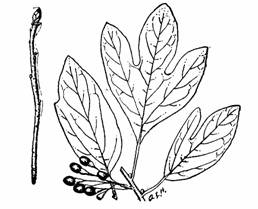 one of three distinct shapes: three lobed, mitten shaped (both right and left handed mittens) and unlobed. Twigs are greenish and aromatic and the bark on older stems is deeply furrowed and reddish-brown.

One is most likely to encounter this lovely little tree along roadsides or in open areas. It is an aggressive pioneer that can become established very quickly on abandoned fields. The fruit, a blue drupe borne on a red stalk, is eagerly eaten by a wide variety of birds that effectively disseminate the seeds. Once established sassafras can produce root sprouts which is why you often see it in dense thickets along roads and in abandoned fields. Although most of us would regard this as a small to medium-sized tree, a specimen over 6 feet d.b.h. and 100 feet tall has been reported. Sassafras is shade intolerant and does not grow well in shady locations. There is good evidence to show that sassafras is alleolpathic (i.e. it produces chemicals in the roots that are inhibitory or toxic to other plants). Although this phenomenon is not well understood it may be the reason that it is able to become established easily and maintain itself in relatively pure clumps.

Although sassafras is occasionally used for furniture and cabinets, it is relatively unimportant for forest products. However, this was not always the case.

As early as 1574 sassafras was touted as a plant that could cure a vast variety of diseases. Native Americans, who used the plant for medicinal purposes, introduced it to the Spaniards, who then spread the word. Entrepreneurs from the Old World sent out expeditions to find and gather sassafras which, was carried over the sea to Europe . Exports of sassafras roots from Jamestown provided an early source of income for the settlers. Unfortunately, the promised cure for various aliments did not pan out and it soon lost its reputation as a cure-all. However, a tea brewed from the root bark is still used by some old timers as a "spring tonic". In the South a powder made from dried leaves of sassafras, called file, is used to thicken and flavor certain Creole dishes. The wood of sassafras is fairly durable, making it useful for fence posts. Deer love to browse sassafras and various small mammals and birds eat the seeds.

If you are one who prefers to landscape your grounds with native plants, sassafras would be a good choice. It produces fragrant yellow flowers in the spring before the leaves unfold. This combined with the variously shaped leaves, deeply furrowed bark and fall foliage that varies from yellow to orange or salmon color makes it a very attractive tree.

The major enemy of sassafras in Connecticut is a fungus, which causes target-shaped cankers on the trunk. Although seldom fatal, the disease causes distortions in the stem and renders the wood unsuitable for furniture and cabinets. There is no known method of control although trees on good sites seem to have fewer cankers.

This article originally appeared in the September 2002 ECFLA/WDLT Newsletter.