Shagbark hickory (Carya ovata) is one of four hickories found in Connecticut. Of the four it is probably the most easily recognized. The large plates of bark which tend to bend away from the trunk and give the tree a shaggy appearance make it difficult to confuse this species with any other. Shagbark has a compound leaf with 5 (rarely 7) leaflets. Fruit are produced, often in great abundance, at intervals of 1 to 3 years.
The nuts which have four ribs and a strong shell, are covered by a ¼” to ½” thick husk.

Squirrels help propagate hickories by burying the seeds. Most of those that don’t wind up in the stomach of a squirrel, germinate and initially grow a long taproot while adding very little top growth. Once a root system is established the top starts putting on height growth. Most of the mature shagbarks in the state reach 70 to 80 feet with occasional trees over 100 feet. When growing in a forest, in competition with other species, it characteristically has a long, straight trunk and a small open crown. Shagbark, when cut, produces stump sprouts and occasionally root sprouts. This characteristic would make it an excellent candidate for coppice production of fuelwood. 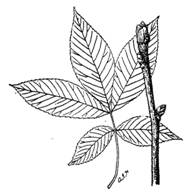 Shagbark hickory, which grows on a wide variety of soils, is generally regarded as a slow growing species. Oak and other common associates grow at a faster rate. However, shagbark is intermediate in its tolerance to shade and will respond rapidly when released from competition. It is relatively long lived (up to 300 years) and is regarded as a climax species over part of its range.

For many years the wood of shagbark hickory has been the wood of choice for fuelwood. It has an extremely high heat value and burns long and evenly. It was recognized early on in the history of this country for its ability to give great flavor to smoked meats. Like most of the true hickories the wood is very heavy, close-grained and has great strength. It was used extensively for such things as tool handles and wagon wheels because of its ability to withstand impact. Modern day uses of the wood are for furniture, flooring and tool handles.

Hickory nuts are a valuable wildlife food. Squirrels in particular seek the nuts starting in early August. During a good mast year the nuts provide the majority of their diet. A large variety of animals including deer, turkeys, foxes, chipmunks, wood ducks and mice use hickory nuts for food. They were also an important food for Native Americans who extracted the oil from the nuts and used it in their cooking, especially for making various cakes. Of all the hickories except pecan, shagbark with its sweet meat plus relatively high productivity (up to 2 bushels per tree) has the greatest potential for commercial nut production.

If you are willing to put up with the nuts and litter, shagbark is a good ornamental. The shaggy bark, longevity, few severe disease and insect problems and attractive yellow fall color make it a good choice if you favor native species in your landscape.

This article originally appeared in the June 2003 ECFLA/WDLT Newsletter.